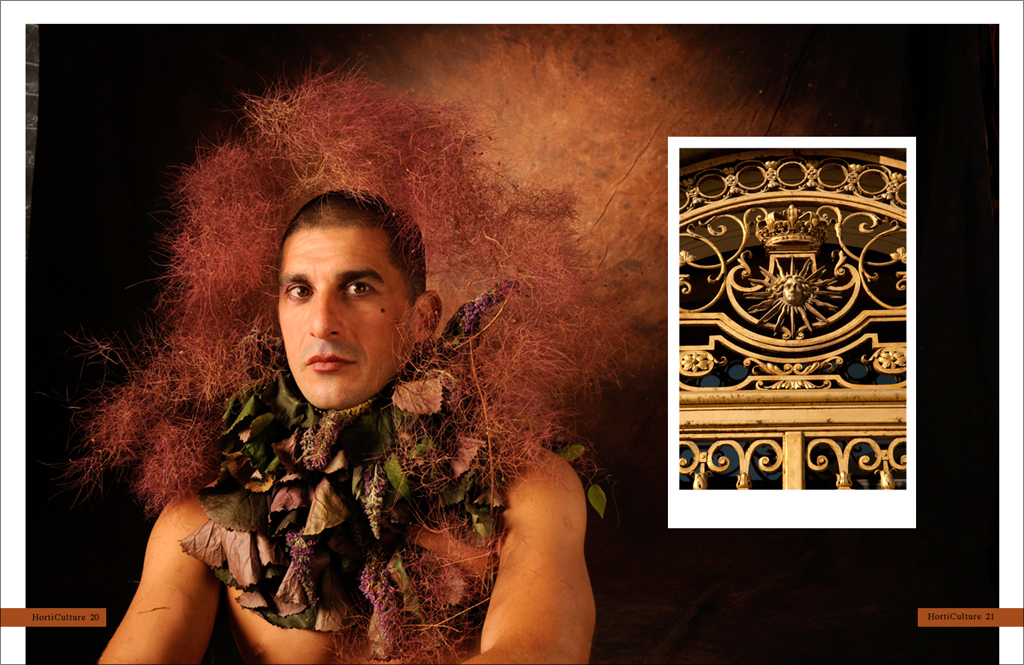 The decadence of Sun Kings: portrait of a young man wearing a collar of fresh Ligularia and a photo of the golden doors of Versailles.

A Dressing the Future is a new series which integrates my artwork into a magazine format. The first of this series is called Jardin Culture and the first issue is “HortiCulture”. The editorial format of a magazine allows me to present themes in my work that raise awareness about socio-political and environmental issues. This magazine is placed in a dystopian future and I have created pseudonyms for the various aspects of my work. Dexter Nicholson is the editor and contributors include: Jean-Xavier Destroches- photographer, Nicole Vivian D’Extras- fashion designer and Élocin Sartxed-  sculptor. In mr. Nicholson’s inaugural editorial Art and Dystopia Today he writes:

“Here at AD/Dress Media, our objective is to address issues of our present dystopia by first looking at the distant past. We ask ourselves: How did the affluence of North America decline into Third World conditions? Immediate answers can be found in the complacency of the early twenty-first century, which ignored warnings such as the collapse of the Greek economy, the agricultural damage of climate change and the insatiable drive for cheaper goods. The underlying factors leading to our present lack of basic resources such as water and electricity can be traced as far back as the 17th century where we began to dominate nature for our amusement. Therefore I begin this inaugural publication of Jardin Culture with a look at the hedonistic style of Baroque gardens such as Versailles, as a departure point into centuries of elevating ourselves above the natural world. Now that the ground has shifted, both literally and metaphorically, many of us are looking to understand how we got here.”

The premise of this futuristic magazine is that there are no advertisers therefore no staff, no money for writers only artists, who as usual don’t get paid. This mad editor is the descendant of the once powerful media conglomerates and he has inherited an old press and like a steampunk revivalist he decides to delve into the archaic art of printing on paper.