Tagline: When the hourglass runs out

Logline: Years of mega-droughts have transformed once thriving agricultural lands into an arid wasteland. A lone survivor faces the harsh challenges of living in a desert by traveling to a dew-collecting tower high above the dunes.

Setting: A dystopian future in a hot dry desert.

Chronos is the second short film in the A Dressing the Future trilogy. It has been in production since 2021 with a scheduled release in the fall of 2022. Chronos is based on a Father Time figure who survives in an environment that has eroded into a desert. He lives in a sand filled house tinkering with sculptures constructed from old analogue time-based instruments. He is a Steampunk-like character who has adapted to his harsh climate by creating a water harvesting structure based on current Fog Catcher designs such as the Warka Water system by Arturo Vittori.

The myth of Chronos spans many centuries, from the vengeful Greek Titan Cronus to Renaissance allegory of Father Time wielding a harvesting scythe. In the film, Chronos represents both the anxiety of the climate change doomsday clock and the real prospect of death from living in such a harsh climate.  This is tempered by his resourcefulness and ingenuity which drive him to endure. He grows edible plants such as Aloe Vera, Prickly Pear Cactus, and Cholla Cactus and he makes his clothing with Yucca leaf fibres, which he harvests at his dew collecting apparatus high in the desert plateau.

In the first scene Chronos is working bent over his desk in a dilapidated house where the floor and windows are covered with sand. Shelves on the walls are overflowing with sculptures made from old enlargers, telescopes and cameras. He has flashbacks of the devastating sandstorms that left him homeless but driven by hunger and thirst he confront the sand and wind to reach his Fog Catcher where he can finally wet his parched lips and collect his edible plants. When he returns home, Chronos ponders his vegetarian diet and the future of his pet iguana.

Experimental in tone,  Chronos brings to light our human resilience and ingenuity in the face of our environmental crisis. This nearly silent film builds the arc of the story and conveys the plot mainly through visual storytelling. My background as a visual artist and costume designer have influenced my style of film making and am inspired by others such as: Akira Kurosawa, David Lynch, The Cohen Brothers, Xavier Dolan, Peter Greenaway and the great Fillini. I have designed all aspects of this film from the elaborate costumes to the set and props and have imbued them with a vibrant palette of Indigo blues and warm desert tones. This short film works on many levels: it is a survival story, it is an ode to clever inventions and an exposé on the impacts of  industrial agriculture. My choice of drama instead of the documentary genre is based on my interest in imagination as a means to propel us into a environmentally secure future.

Imagination is the beginning of creation. You imagine what you desire, you will what you imagine, and at last, you create what you will.
George Bernard Shaw

Whether it’s Mad Max or the Book of Eli, Hollywood has told us that once humanity destroys the earth, our sense of style will go with it. We’ll be destined to dusty clothing that only comes in tan and brown with hard metal accessories. But Nicole Dextras is an environmental artist who thankfully has a colourful vision for post-apocalyptic couture and her inspiration comes directly from the idea of plant-based fashion. Take a look.

Amanda Paris for the Exhibitionist on CBC Arts 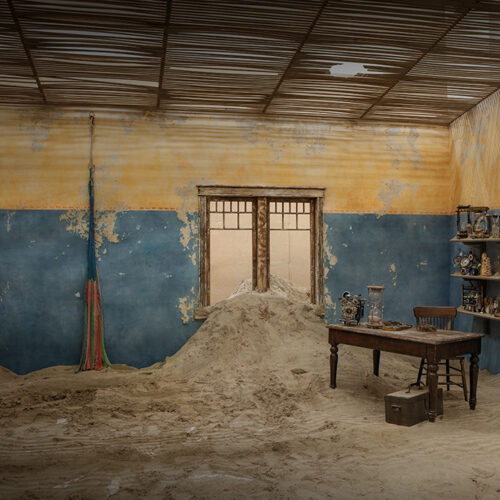 Chronos’ house. Design by N. Dextras, build by C. White, scenic painting by O. Elias. 4 tons of sand were brought in for the shoot. 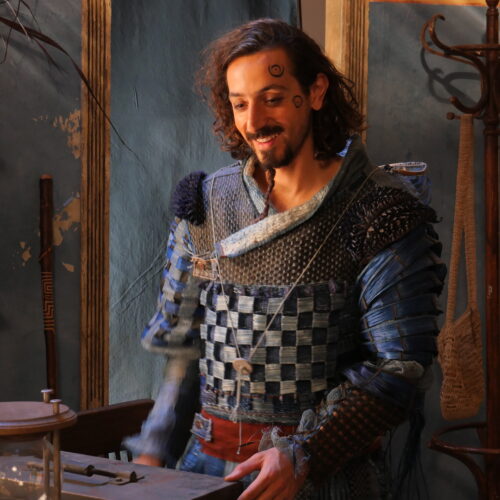 Chrono’s jacket is made entirely out of bast (plant-based) fibres dyed with Indigo and various dyes. Hand spun fibre from the Yucca plant and Willow bark are featured. 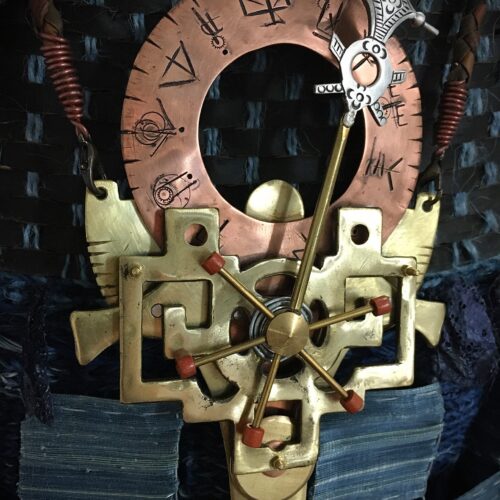 Chronos wears an amulet created by his father, which allows him to be guided by the stars. Created by Catherine Hahn from repurposed metal hardware. 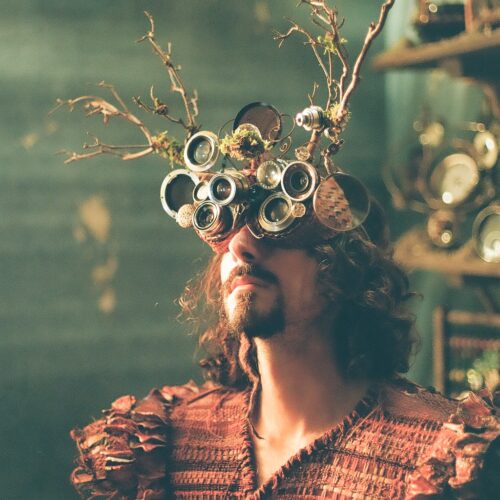 Chronos wears a Steampunk like headpiece made from reclaimed lenses, branches and woven bark. Photo by Bruna Xavier 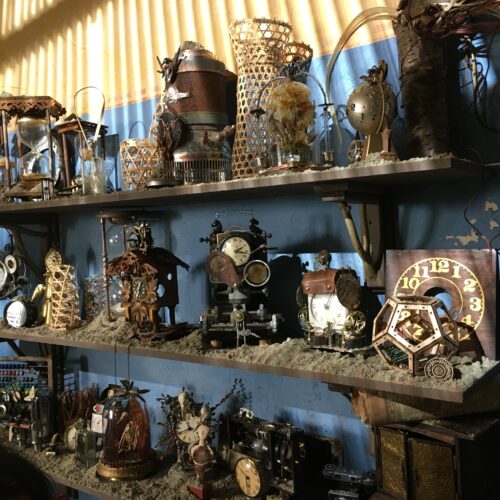 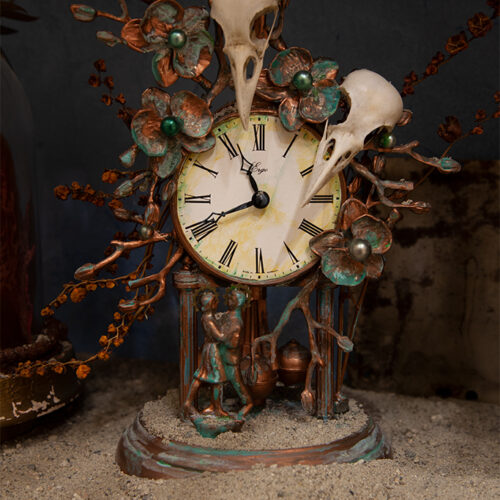 Chronos is obsessed with time. He wishes he could have slowed down the effects of climate change 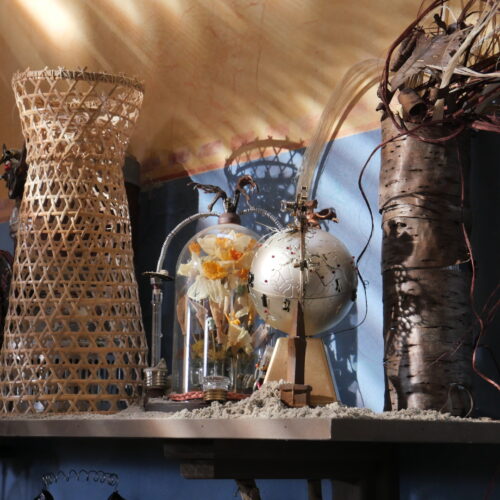 In the middle of the shelf is a miniature woven model of the Fog Catcher design. 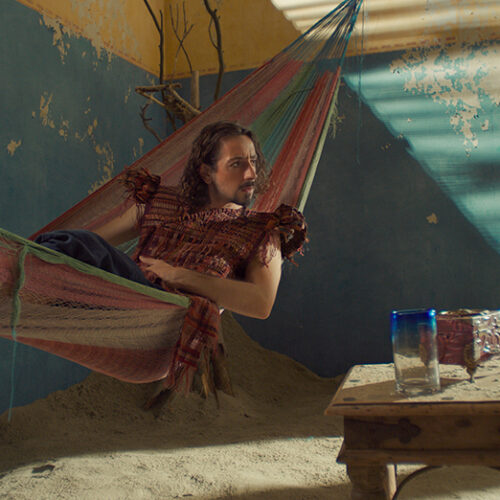 Chronos senses movement and wonders what or who it might be. 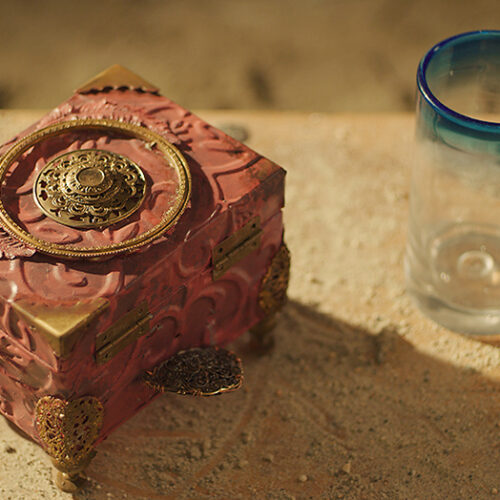 The music box with it’s home spun figurine segues into a dream sequence about Chronos’ mother. 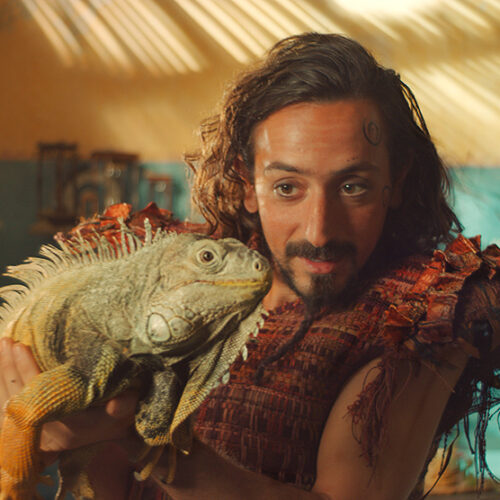 Chronos has a pet iguana and hopes he will be able to survive as a vegetarian for many more years. 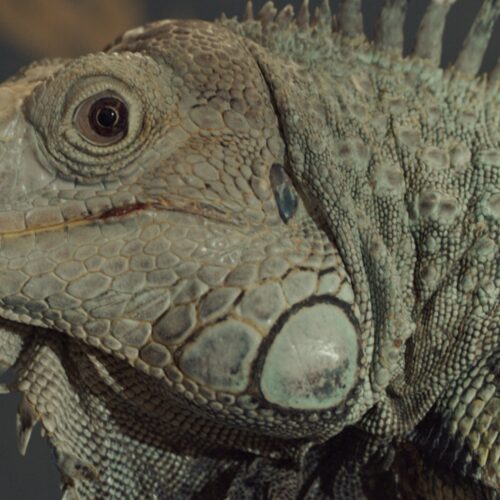 This full size iguana charmed everyone on set. He loved to ham it up for the camera. 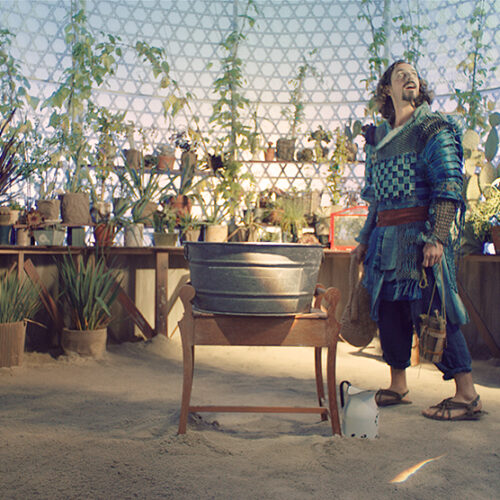 Chronos arrives at his Fog Catcher, which collects dew from the atmosphere via the mesh inside the structure. He gets his water supply and grows edible desert plants inside it. 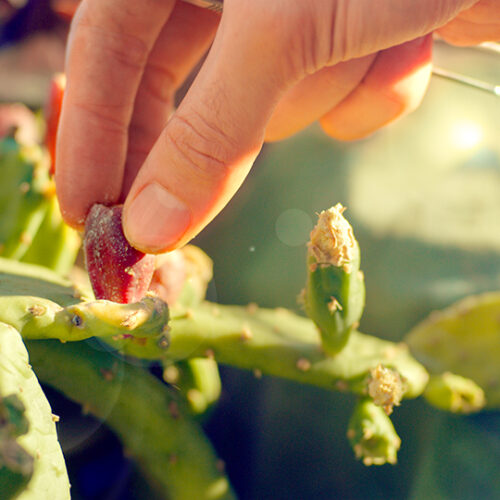 Chronos picks the red juicy fruit of the Prickly Peat 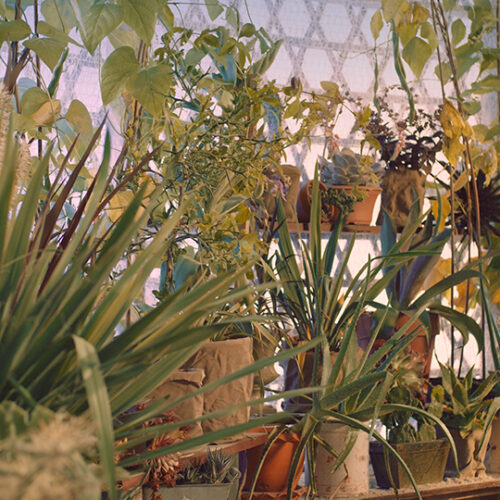 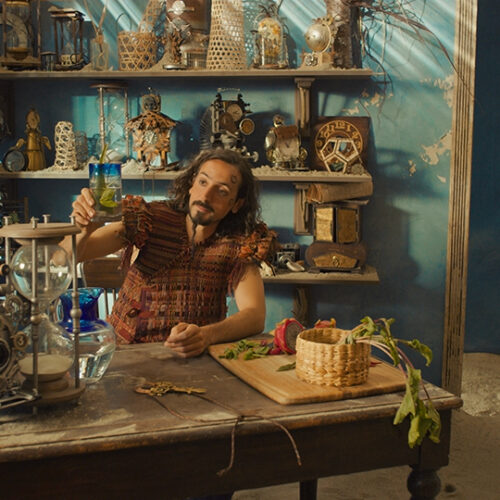 Chronos makes a refreshing drink with fruits and herbs 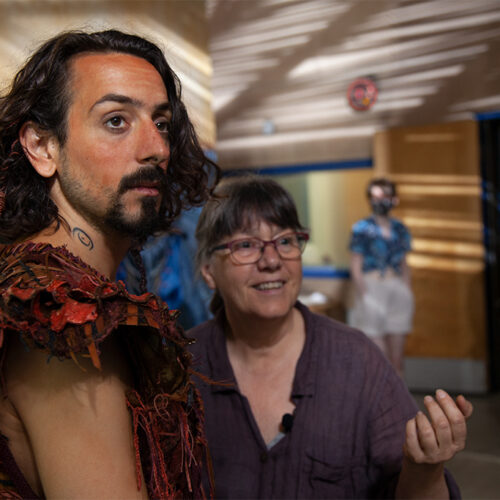 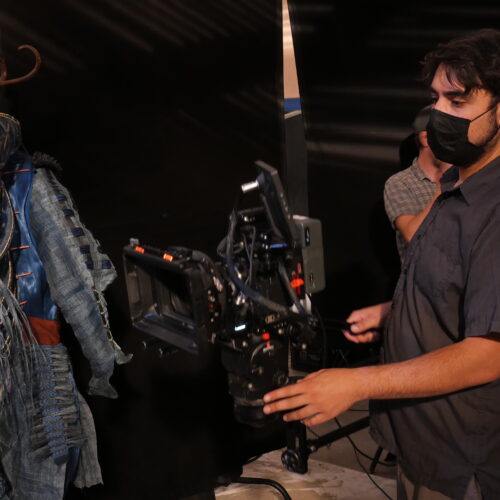 Cinematographer Naim Sutherland on set with his RED Helium camera 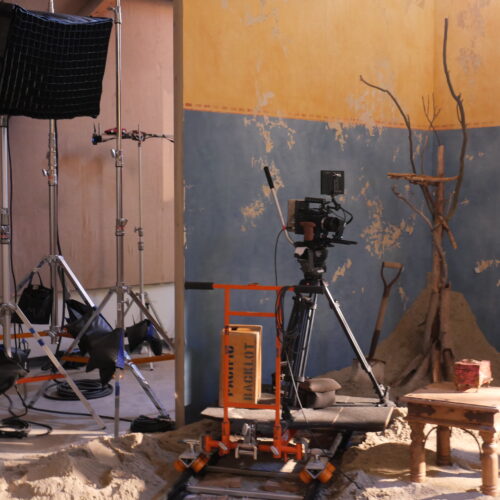 Laying track in the sand is no easy feat. We had an amazing crew. 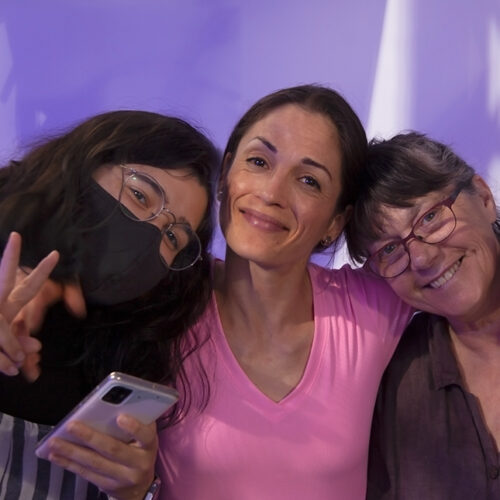 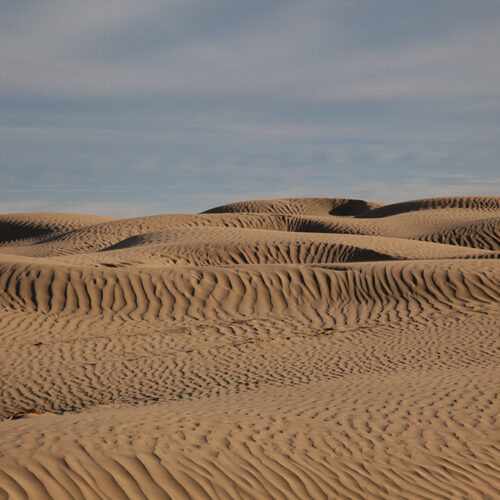 Location Scouting at the Great Sand Hills in Saskatchewan.